I know that you don’t need a yogurt maker to make yogurt at home, but when my mother-in-law asked what I would like for my birthday I knew that little yogurt maker I had seen would be the perfect gift. So that’s what I got.

My first attempt was a complete fail! I followed the instructions that came with the machine but the end result was more like a drinking yogurt, very runny, but I did manage to use it in smoothies and cooking.
So I decided to see what others were doing by searching the web. I soon released that I needed to heat my milk before adding the yogurt culture. I also learned that adding some powdered milk will help it get thicker.

This is what I did:
Heat 1 litre of milk with 1/4 cup powdered milk mixed in, to about 85 degrees Celsius (180-185 degrees Fahrenheit). Apparently the longer you hold it at this temp the thicker the yogurt will be due to the water evapouration.
Allow the milk to cool to about 45 degrees Celsius (115 degrees Fahrenheit)
Mix some of this cooled milk with 2 tablespoons of plain store bought yogurt that contains live cultures (I have found that almost all of them contain these cultures, just check the tub).
Now add your yogurt mix to the cooled milk.
Pour the milk into your yogurt maker and set the number of hours you would like it to culture. The longer it goes the thicker, but tarter it will get. I found about 8-10 hours works well.

I was blown away by the results after following the correct instructions. My yogurt was so thick, thicker than greek yogurt. And it tasted just as great as the store bought stuff…no, better!

Yes, that is my yogurt tub standing on its side without anything falling out, it was just that thick 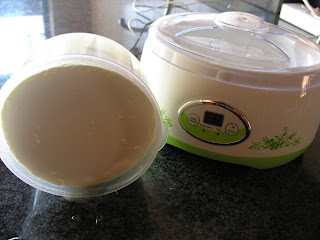 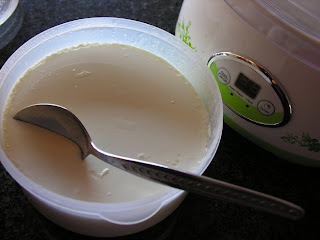 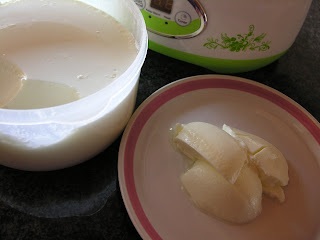 For my next batches I just save a couple tablespoons from the last batch for the started yogurt.
I must admit my second batch was not quite this think, but still as thick as greek yogurt.
Next step is making my own muesli!

I have never been fond of shop bought muesli as I could never find one that had all the things in it that I enjoy, and enough of those things to get a taste with every bite.So here is how I made my own muesli with all my favorite nuts and seeds at just the…

Yesterday I decided to make some cream cheese. I call it cream cheese because it is very creamy and much better than any cottage cheese I have had.I love cream cheese and could use it with everything. The problem is that it is quite expensive. I got this method from my mother-in-law and it is…

My husband is a coffee addict. Seriously! He even won a “coffee addict” competition on facebook to prove it. So when I asked him what he would like me to bake, I should have guessed the answer would be coffee biscuits. I tried a few recipes before deciding that this is my favorite so far….

I have been wanting to link up to the VeggieGobblers Thursday garden gobbles for a few weeks now, but I keep forgetting to take pictures of what I cook. But yesterday I remembered! I got this recipe from Two Men and a Little Farm quite a while back and I have been using it constantly….

As the rain continues to fall after 3 non-stop days, my fingers are itching to get back into the garden. And the weather says it is going to continue like this until the weekend.I have however managed to keep myself busy in the kitchen and one thing I cannot get enough of at the moment…

While visiting the Veggie Market a couple weeks back I passed the pumpkins and came across this beauty on special  I have never actually cooked a pumpkin before as we generally prefer butternut squash, but I could not pass this up.I have been reading some recipes online where people have cooked an entire pumpkin by…